This was the second helping for me at this intimate French restaurant tucked away beside the church in the centre of Richmond. A group of us ended up here in the summer after an intense session at the Richmond Gate Hotel where we’d been learning how to recognise stress in different personality types. Yes, even tortoises get stressed. It was quite by chance as this normally quiet suburb of London wouldn’t be the venue of choice for a working event. At the time Olympic Madness had descended on London and you couldn’t get a hotel location for love nor money in central London. Needing somewhere to unwind in the evening, a quick look at the Hardens Guide threw up this place. If you haven’t found Hardens yet then you need to (www.hardens.com). It is a great site to find a well-reviewed place to eat just about anywhere. The Tortuga lives by it.

The evening we all went out together we sat outside in the courtyard under the awning. It was the height of summer and beautifully cool and a great atmosphere on what was otherwise an uncomfortably humid day. We all liked the place very much and wondered what it would be like to eat inside. So when the Tortuga announced that we were going to the theatre in Richmond on Saturday and going to La Buvette for pre-theatre dinner I thought that at least the dinner would be good. As it turns out I was right … at least the dinner was good. I have a low boredom threshold for organised entertainment. The Richmond Theatre is a wonderful old place where we have seen some great plays. Regrettably this evening just wasn’t one of them.

La Buvette is traditionally French. In fact the website describes itself as ‘the perfect French Bistro’. The staff are excellent and the man in charge clearly knows his regulars. Which is a good sign. Unfortunately Richmond does rather tend to attract the self-satisfied crowd who just have to let everyone else know how clever and successful they are. Unfortunately there was one such foursome, two couples in later middle age, sitting next to us. They were noisy and I felt rather thoughtless in a loud self-congratulatory way. Also the tables are rather close to each other. So a thoughtless party of diners in close proximity can rather ruin things. As in this case.

To compensate, the food was excellent. Unfussy and well prepared. Crab beignet with soy and ginger to start, followed by scallops and onglet. All accompanied by a 2008 Pessac-Léognan from a balanced wine list that did not contain any silly prices. Round about £100 for the two of us I thought was good value for the standard of the food. The only notable item was the onglet which featured the note ‘served rare’ on the menu. Being a French place I was expecting it very rare, but of course it wasn’t, but then this is Richmond! 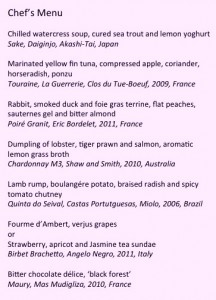 Perhaps my expectations were just set too high, but this was a real disappointment. Gordon Ramsay is the only person I know of who swears more than I do. Well, he needs to get back into his kitchen at Maze and start swearing at his restaurant managers.

First of all, it’s a fact that the front of house staff are fantastic. They were friendly, attentive, presentable and couldn’t do enough. It’s the food that lets it all down. We went for the Chef’s Menu with the drink pairings. I have to say that at £70 per head and £125 with the wine it’s nothing short of a rip-off. I know it’s an expensive Grosvenor Square location, I know it’s rip-off London, but that’s no excuse for mediocre flavours and to be honest, wines that didn’t do the food any favours at all, but were rather more an interesting wander around some unusual choices.

For me, especially at these sorts of prices, the wines have to be absolutely perfectly matched, so that they change on the palate when coupled with the food. This just doesn’t happen here. My guests were from the Lebanon and one of them knows a thing or two about wines. He was politely interested in the selection, but you could see he wasn’t impressed. Rice wine and pear cider? These are interesting on their own, but are never going to enhance any dish other than mussels.

The portions were very mean, even by degustation standards. Watercress soup, yellow fin tuna, terrine. You can check out the menu for yourself. The lobster dumplings were very good, the lamb also, but it was unfortunately fatty and there was a lot of it. Fat, that is. We waited in pregnant embarrassment for maybe five minutes for one of the plates of dumplings to arrive. How hard can it be to manage to serve seven diners at the same time on the same menu? Then for pudding there was the inevitable assault of black forest gateau. With the odd assortment of wines, sake and cider, I have to say that my insides were feeling bombarded and well fermented by the time it all ended. It required a long walk home to settle matters.

The website talks of David Rockwell’s stunning restaurant design. Well, all I can say is that it is very noisy, lacking in any ambience and the people who sat behind us were treated to a nice view of the backs of our heads on one side of our table. I’d have been very pissed off if I had been sitting there.

This was my one and only venture into a Gordon Ramsay restaurant. I thought it was formulaic and lacking in any real differentiation from say, a Chez Gerard. Personally, I would give this place a miss and stay at home.