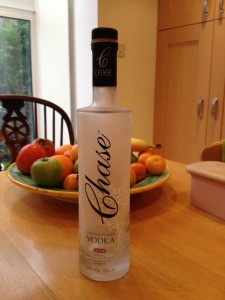 It’s official – I have found the best vodka. It is made from potatoes and believe it or not comes from rural west of England – Herefordshire. Discovered this in Waitrose on Saturday and we drank the bottle at a dinner party on Saturday night. Sunday I had the hangover to prove it – I think it must have been the champagne.

I normally stick to Russian or Polish vodka. It always tastes right. For me vodka needs to go down smoothly with a clean aftertaste that lets you know you’ve had a drink, but doesn’t overpower. Some of the muck you get, branded ‘premium’, just shouldn’t be on sale. So this was a bit of a risky purchase. There’s a lot of competition in this market and some silly prices on display. This is priced sensibly between those ludicrously expensive Polish and French brands and the good old standards from Russia. Although I do wonder how much you pay for the flash box it comes in. The website says it was voted best vodka at the San Francisco World Spirits Competition 2010. Now that’s a show I think I would like to attend.

There is a great website you can look at (www.chasedistillery.co.uk) and I think I’m tempted to buy a bottle of marmalade vodka next!