OK, so I have to admit it, we needed a dose of abject luxury after the rigours of six days of 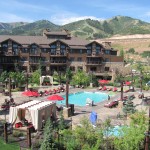 hard riding. On the way south on our road-trip journey to Arizona we checked-in to the Waldorf Astoria in Park City for two delightful nights. This is 5-star luxury as good as it gets. In the summer time it’s great, the hotel apartments are arranged around the outside swimming pool, but in the winter it must be spectacular. We had a duplex room arrangement with the kitchen and living area downstairs and a large bedroom and the main bathroom upstairs. Great set-up if you have children with you who can sleep separately downstairs.

The apartments have inside and outside fireplaces and I can imagine that sitting out on the balcony at night with the fire going, après-ski, must be sensational. The kitchen was kitted out with all the best quality gear and could quite happily have formed the centre of a luxury flat.

The service is second to none. Nothing was too much trouble from the good-natured unloading of the SUV (suitcases, boots, plastic bags bulging at the seams and spilling their contents) to accommodating a late night meal and keeping the bar (unofficially) opened. Here they officially stop selling alcohol at nine in the evening – it’s Utah after all.

A really nice touch was a barbeque area out by the pool where the children could sit into the evening toasting marshmallows. Pity the person who’s job it was to scrape the burnt sugar off the stones in the morning. But, you know, I bet whoever’s job it was did it with a smile.

We would absolutely love to come back here in the winter.

Off the beaten track a bit and near the old Olympic stadium, you’ve got two other good places to stay: the Hilton and Bilderberg Garden hotels are right next to each other in Appololaan. We quite often end up playing room rate roulette between these two places. The Hilton’s rooms are a bit tired now and you are almost guaranteed to get a room with connecting doors, but it has a really great bar, which is both large and has comfortable armchairs and a nice open fire if you can get near it. It looks out onto the boating lake, very pleasant in the summer and atmospheric at night when lit up. The bar staff know their wines too.

The Bilderberg Garden just across the road from the Hilton is an interesting place. Apart from anything else it has a first class restaurant called De Kersentuin. I think that means cherry something in Dutch. I know that it used to be a very well regarded place to eat as one of my Dutch colleagues is bit of a foodie and was very enthusiastic when we all ate there one evening. I don’t think it has quite that foodie reputation these days, but it is certainly of a very high standard. Also a very good wine list too. Not too long, but clear and easy to work around and quite good value for a top class place for a nosebag.

I can’t quite work out what this hotel is trying to be. I rather like it, not just because they provide slippers in the rooms and have big bathrooms, but also because it has a great barman. It’s sort of somewhere between an upmarket tourist hotel and a business hotel. There are all the work-related things you need like a decent desk and high speed wi-fi, which of course is a rip-off like everywhere, but it has a private hotel feel about it too.

It is to my shame that I’ve never asked the name of the barman. He’s a bit diffident at first, but warms up when you get him to open his cocktails recipe book and get creative. Last night I started him on the benchmark cocktail, a vodka martini which if it’s made properly will tell you what the rest are going to be like, then we worked through the more creative variations – a couple of apples and then espresso variants. I have to admit that although his apple martinis were very good, it wasn’t his fault that the barman at the Taj Residence, who currently tops the league table on this one, had access to a sharper type of apple more suited to this cocktail. Must be an Indian variety. But his conversation was very entertaining. I’m wondering whether I should start a good barman category.