It’s a fact – only Americans really know how to do Christmas! 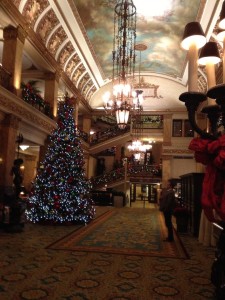 We had to visit Milwaukee and were recommended to stay at this strangely old fashioned hotel called the Pfister. I don’t think Milwaukee is really known for its old architectural charms but this place had all the feel of a slightly world-weary central city hotel from Paris or Vienna during the last century. There was nothing old fashioned about the rooms or service I should add, but the most impressive part was the main lobby which had a rococco style to it complete with the wildest ceiling that you will find in any hotel. It looked as though it was inspired by the paintings from the Sistine Chapel, even down to the Salve at each end.

Of course being Christmas the place was wonderfully decorated and sported an enormous tree that would have put London’s own Claridges Hotel tree to shame. Naturally there is also a great lobby bar just asking to be relaxed in.

There is something magical about a trip to the big cities of the north or east in the US around Christmas time. They manage to make everything so atmospheric and you can just feel the holiday thrill through the decorations and the lights.